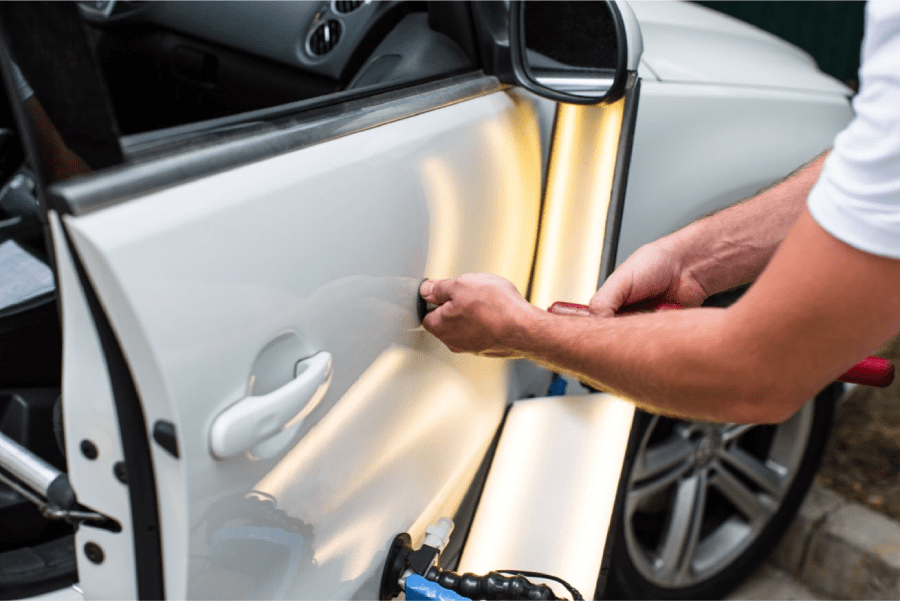 There are a lot of possibilities that your car may get a dent or hail damage. The dents on car’s exterior badly affect its appearance and re-sale value. In order to remove a dent from car’s body, there are various methods and one of it is paintless dent removal or paintless dent repair (PDR).

Paintless Dent Repair or paintless dent removal (PDR) is a method that is used to remove minor dents from the body of a vehicle. Read its detail here.

This method is used to fix different kinds of dings, dents and body creases. The best thing about this method is that it is environmentally-friendly and it restores a car’s body to factory-like condition as long as the paint surface is intact.

The paintless dent removal service is available in body shop in Brooklyn and it revolves around four main steps that include:

Let’s take a deeper look at how does paintless dent removal work in Brooklyn.

Damage inspection is the primary step to paintless dent repair process. In this step, the auto technician assesses the dent and its damage. He needs to locate all dents from minor to major and assess their intensity. Once dents’ calculation is done, the work on their removal can be started using PDR technique. Usually the area around the dent is prepared.

At this stage of PDR, you need to safely reach the back side of the dent area. This means you have to cautiously remove car’s tail lights, body panels and other parts that are blocking you to reach the dent. All you need to do is to safely gain entry to the dent.

Slow Pressure to Fix the Dent

To work out the dent, apply slow pressure on the affected area. To perform this, special tools are used to cautiously massage the back so it can come to its initial position. Depending on the dent and exterior damage, PDR process can be done with same-day service.

The paintless dent repair is not only quick, it is also cost-effective method to remove car dents. It is very efficient method than the ordinary dent repair method in which auto body dents are filled with paint or body filler to paint. It may give the vehicle a brand-new look but it’s not long term and sustainable. On contrary, paintless dent removal is an expert technique that restores the car to it factory condition in time-saving way.

Looking for body shop near me or insurance claim assistance? Find the best collision repair in Brooklyn and get amazing results.

Since 2004 Auto Group Collision has been providing the people of Brooklyn and surrounding areas with the highest quality of collision repair and auto body repair service. We established a trusted collision center that takes customer from the initial estimate to the completion of repair to getting you back into your car and in the driver’s seat. Our certified shop will get your vehicle repaired properly.

Serving more than 600-700 customers per year, Auto Group Collision is one of the top company’s in the area because of its sterling reputation for providing reliable, fast and accurate accident repair. We also work closely with your insurance company along we can perform maintenance, customization of your automobile and even upgrade its appearance.